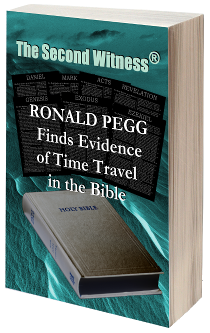 Read and follow his journey of discovery as his time travel findings and the evidence presented and discussed by Pegg are explained to his three closest friends and his brother at various times and locations in Queensland between the years of 1998 and 2002.

Read the Bible for yourself to see what God wants you to do with your life, and to find what meaning the Bible will have for you.

In 1998 Pegg reported back to his friend with what he found in the Bible:

The Bible gives the Census figure for the May 1948 Census as reported in a February 1949 Israeli history book.

The Bible describes the nine men working on the Bible Codes between 1958 and 1997.

I have identified the modern identities of the people described as Elijah (Malachi 4:5) and Michael (Daniel 10:13 and 12:1).

I have solved the Revelation 13:18 puzzle.


Utilizing known documented ancient decoding techniques and applying them to The Bible, Ronald Pegg had discovered many hidden messages in its words. He reveals the true source of the Bible Stories, and explains the visions described in Revelation - and these findings will shock the world. Explanations are provided to enable people to check those discoveries for themselves.

Pegg used home-made visual presentations for his February 2001 study groups to assist in evaluating his discoveries. Transcripts are included herein.

The revelations of Pegg's words are startling.
The evidence of the associated images is compelling.
The consequences ..... are earth shattering.

Come along on a personal journey of discovery as Pegg reveals to you how he discovered Evidence of Time Travel in the Bible.

To contact us
Email Robert via ceo(at)ronpeggdiscoveries.com.au
giving the subject heading as
Licence to Publish 2ndW Printed Book

Please note that a licence for the inclusion of The Second Witness® registered trademark on the book is separate and in addition to your Print and Distribute licence.

Film rights are separate  (See next) 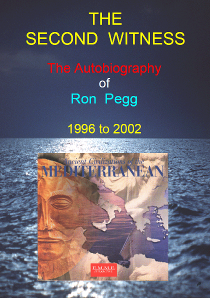 and over 20 Powerpoint Presentations.

This production requires further development
Prologue
Ronald Pegg believed that the best way to be introduced to his Discoveries is to not only read about each discovery chronologically, but to be there with him as he explained his research and discoveries to his friends over a five year period. In this way you will, as they did, see how all the pieces of the puzzle fell together as each discovery was made.

With this in mind he produced his autobiography first as a SCREENPLAY resource for either a Television mini-Series or major Film.

Introduction
A previously unknown man from north-east Queensland, Australia, had been researching and studying "hidden messages" in ancient manuscripts since 1996.

In 2000 Ronald Pegg decided to reveal the true source of the Bible Stories, and to explain the visions described in Revelations - and these findings will shock the world. All the evidence is provided to enable people to check these discoveries for themselves.

This screenplay resource presents the discoveries of Ronald Pegg as discussed by him and explained to his three closest friends (who are Christians), and his brother (who is not), at various times and locations in Queensland (Australia) between 1998 and 2002.

Pegg's explanations take the form of

verbal discussions with his friends

readings direct from his Bible Study Documents and Personal Diary

important points written on a blackboard

charts and lists shown on A3 sized paper

CD-Rom presentations on a computer

To contact us
Email Robert via ceo(at)ronpeggdiscoveries.com.au
giving the subject heading as
Licence for 2nd Witness Film

Please note that a licence for the inclusion of The Second Witness® registered trademark is separate and in addition to your Film licence.
TOP   BACK to Licences on Offer page